Liz jumping to a first place finish at the Gretna Invitaitonal. 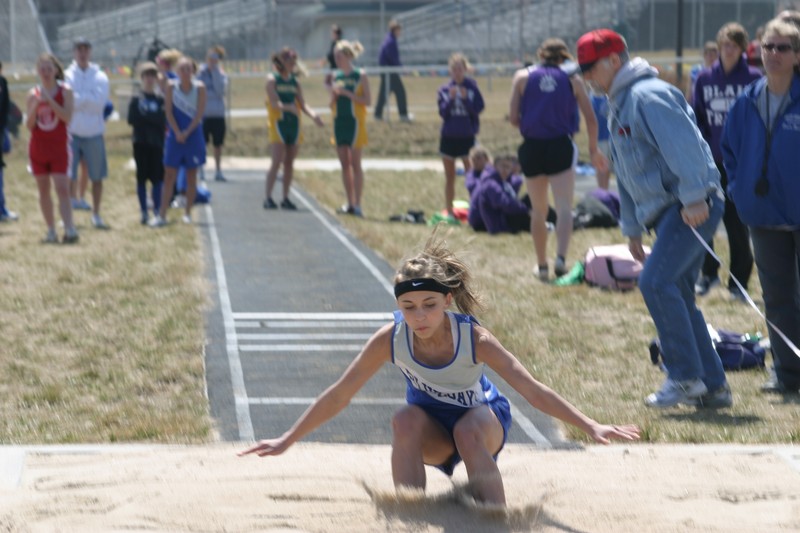 Launch the media gallery 1 player
Liz jumping to a first place finish at the Gretna Invitaitonal.

The AG girls track team had an excellent day at the Knights of Columbus track meet at Gretna on April 5th.  The team scored 108 points.  Leading the team scoring was Liz Romans with three first place finishes.  She leaped 16’ 1 ¼ “ in the long jump, she blazed through the finish line at 12.4 in the 100 m and 26.2 in the 200m.  Shelby Wigle scored 20 points for the team with two first place finishes in the pole vault and high jump.  Her goal is set for state in the pole vault and her high jump is also looking promising.  The girls hit many of their goals and competed hard throughout the day.  Other medalists were Sarah Spargen placing second in the 100m and third in the long jump.  Mandee Fox placed second in the pole vault and the 4 x 800m relay team consisting of Sam Reed, Laura Nenemen, Melissa Vandeman, and Stefanie Hoffman finished second.  Freshman Amelia Allington demolished her discus goal throwing 91’ 6” placing third with only a power throw and she also placed 5th in the shot put.  Sophmores Ckalynn Roth placed fourth in the high jump and sixth in the 400m while Sam Reed placed third in the 800m.  Freshman Brittany Fuller placed fifth in the pole vault.  Even though the 4 x 100 relay team got disqualified they broke the tape finishing first with a time very close to the school record 52.2 with a couple of poor exchanges so pending getting the exchanges down the 4 x 100 team also has their sights on state.